Why did I read the comments? 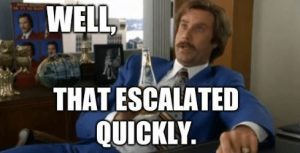 Moderating a Facebook page for any brand can be a headache at times. Sometimes what seems like the most foolproof post can backfire, and we all have days where our judgement isn’t the best (see 29 of the Biggest Corporate Brand Social Media Flubs). Now add passionate animal lovers to the mix, and what may seem like just a cute photo of a squirrel being rescued turns into an opinion war in the comments about having squirrels as pets.

Fortunately there are things you can do to put yourself, and your organization, into a position where you can deal with the comments in an effective and efficient way – and get back to helping animals:

Draw the line – ahead of time:
Have a social media commenting policy in place that explains what is not permitted on your page, and make it a good one. Make sure that your staff and volunteers are aware of it too, and that you’ve run it by the necessary people (if you’re a county funded shelter, you may have more restrictions on what you can and cannot delete).

It’s easy to put on the backburner and focus on things that seem more urgent, but adding a commenting policy in the midst of an opinion war on your page only exacerbates the problem. By having this in place a head of time, you can easily refer to it when moderating comments and encouraging civil discussion. Need a sample social media commenting policy? Check out an example here.

Be fair:
If you have a policy, ensure that you are enforcing it fairly. For example, if you don’t allow profanity and someone makes an intelligent comment that happens to include profanity, you’ll want to delete it, even if you agree with the comment. Consider commenting after removing it, reminding your audience that your page is intended to be family friendly.

Know your audience:
If certain topics tend to get your audience a bit more charged than others, run the post language by a colleague or friend to get a second set of eyes on it. Anticipate the comments and questions that will arise and have responses ready. If you know it’s a post that will require a lot of moderating, do yourself a favor and post it when you know you can keep an eye on it, not before heading to a busy adoption event where you won’t be able to keep a close eye on the comments.

Turn criticism into opportunity:
It’s easy to get irritated at commenters who criticize the already difficult work of your rescue or shelter, but consider using it as an opportunity to educate. Even if you don’t turn around the critic, you may educate others about an issue. If it is a sensitive topic, offer to talk to the commenter on the phone, via messenger or e-mail. This allows for a more honest conversation because defenses aren’t up as much as they are in front of a crowd – even if the crowd is online.

Don’t be in a bubble:
When you’re working around the clock at a shelter or rescue, it’s understandable that you may not be keeping up with current events. But when you’re going to post on social media, do a quick check to make sure you’re not posting something that could be seen as insensitive during a tragedy or disaster.

Try on a new lens:
We all have biases, and respond to things differently. Take a breath before posting and think about if there is anything that your own bias or experience may be blinding you to something that could cuase an issue. It could be as simple as posting a photo of a dog in a kennel that hasn’t been cleaned yet, or a cat being unloaded from a transport that looks uncomfortable being held. You shouldn’t walk on eggshells, but trying to see posts from different perspectives can help you better respond to negative comments, and as a result, win over more supporters.

Empower third party supporters:
Just like every shelter and rescue has their critics, they also have their cheerleaders. If you see supporters answering questions on your page or sticking up for you, make sure to thank them so that they know it makes a difference. Consider sharing talking points on contentious issues with your staff and high level volunteers, so that they can be informed and combat misinformation. Sometimes it’s as simple as volunteers “liking” comments that are more positive on a post, so that those comments are seen first on the post. Not sure you want to have volunteers or staff being a voice for you online? Ask yourself why, and try to address those concerns by implementing a social media policy and training for employees (and volunteers) that provides guidance on what is acceptable. See some examples in the policy library here.

Document
You’ll hopefully never need it, but should you have to delete comments, it never hurts to take a screenshot and save it in case it turns into a bigger issue. Perhaps it’s an upset adopter who claims they never got a response from your organization, but it turns out the only place they reached out was Facebook. Or a person who alleges you adopted out their animal without matching them to a lost report they filed. Scenarios are plentiful, and using free tools like the Snipping Tool make it easy to take screenshots so that you have them, should you ever need them.

Most importantly, keep in mind that one or even ten people on your page don’t represent everyone. If you find yourself getting defensive, bitter or hating every person commenting on your page, see if you can get a break for a bit and have someone else monitor the page for a day or two (this is the perfect time for a “page takeover” by a kennel staff member or foster parent!). If that’s not an option, then prioritize making it a possibility and working with other staff to see how you can support each other. It may seem silly, but even one day of unplugging goes a long way in preventing burn out, an all too common issue in both the animal welfare and social marketing world, and a clear head is the best way to deal with negative comments any day of the week.